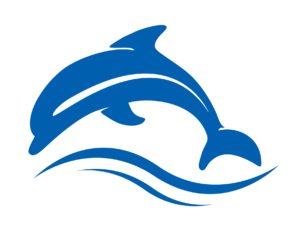 Swim Team Update: The first challenge is the loss of access to our home pool. Edinboro University has made a variety of decisions to protect individuals on campus by limiting the number of students living on campus, limiting the number of students attending in person classes, and declining access to campus facility from outside agencies.
With that decision, the County Y Blue Dolphins are not permitted to practice at the McComb Pool as we have done in past seasons.
The second challenge results from recommendations to our league from YUSA Swim. A majority of the recommendations are meant to reinforce social distancing protocols within our state and county. At this time, we are limited to a max of 25 individuals in the pool area at any one time. The requirements create a maximum of 4 swimmers per lane, with only one swimmer on the wall at a time. Along with these requirements, the NW PA Swim League has adopted a virtual swim season. The virtual swim season will consist of teams swimming meets in their home pool and submitting times to the host swim team. The season would consist of nine (9) virtual dual meets and zero (0) invitations. The virtual meets create a challenging situation for our team since we do not have access to an electronic timing system. Without an electronic timing system, each meet session would need 2 coaches, a lifeguard, 4 timers, and 2 officials, which would limit us to 16 swimmers at a time to conduct a meet. With these limitations a meet would need to be run by age group. This would require our team to host a meet 3 or 4 times to allow each of our swimmers an opportunity to swim for dual meets.
Over the last two weeks, we have had multiple conversations with our coaching staff to discuss options for the 2020/2021 swim season. During these conversations, a common thread became clear to all of our coaches. We believe the most important factor is to provide an opportunity for our Blue Dolphins to swim, to develop/maintain their skills, and to have a safe social outlet during these stressful times.
With that decision, we will plan a series of weekly competitive swim clinics in which your swimmer will have the opportunity to learn, be challenged, and have fun along with your favorite Blue Dolphin coaches. It is our belief that this series of clinics will not only provide an opportunity for the Blue Dolphins to achieve many goals this season, but also provide a bridge for their success in future seasons when in person competition returns.
At this time, there is a brief survey linked here. Once we have received responses from our Blue Dolphin families, the coaching staff and administration will begin developing the schedule and content of the competitive swim clinics. More information will be available within the next two weeks. Our goal is to have the Blue Dolphins back in the water by mid-October.
Take Survey

Every kid has swimming abilities – there’s a little Michael Phelps or Simone Manuel in each of them.  Help yours find their swimming potential through the County Y’s Blue Dolphins Swim Team!  Swimmers of all ages and abilities participate in our Swim Teams.  Led by caring coaches, we emphasize personal improvement through stroke technique and training, a strong work ethic and team work through competitive swimming.   Swimmers compete locally with the opportunity to advance to the district, state and national level.

I joined the County Blue Dolphins Swim Team for the 2017-2018 season. We had an amazing year and had many swimmers advance to the District and State meet.
I began swimming competitively at the young age of 7 for the Bayview Tigers in Webster, NY and continued through on the USA Bluefins swim team until I competitively swam throughout Junior High and High School.

I was a young Varsity swimmer that excelled in Backstroke, Fly, and Freestyle. I attended Mercyhurst University recruited for lacrosse but later joined the Crew Team full time. I graduated in 2003 with a dual major in Psychology and Art Therapy. I met my husband in college and we were married in 2004 later having two children.

I Coached for the local Erie Diocese swim teams for 5 years; Asst Coach at Our Lady of Peace for two years and the Head Coach with Saint Lukes for 3 years. Coaching allows me to provide an interactive approach to incorporate the swimmer’s perspective.I use this to instruct and teach them to excel in the water through technique, personal determination, individual training, and team-work. I enjoy seeing each swimmer excel and expand themselves throughout the season both mentally and physically to SMASH their year-end GOALS!

Swimming is a mental game, but once it’s in your child’s heart it becomes a passion. I look forward to working hard alongside the Coaches this year to have an amazing united season together with the swimmers and their families. 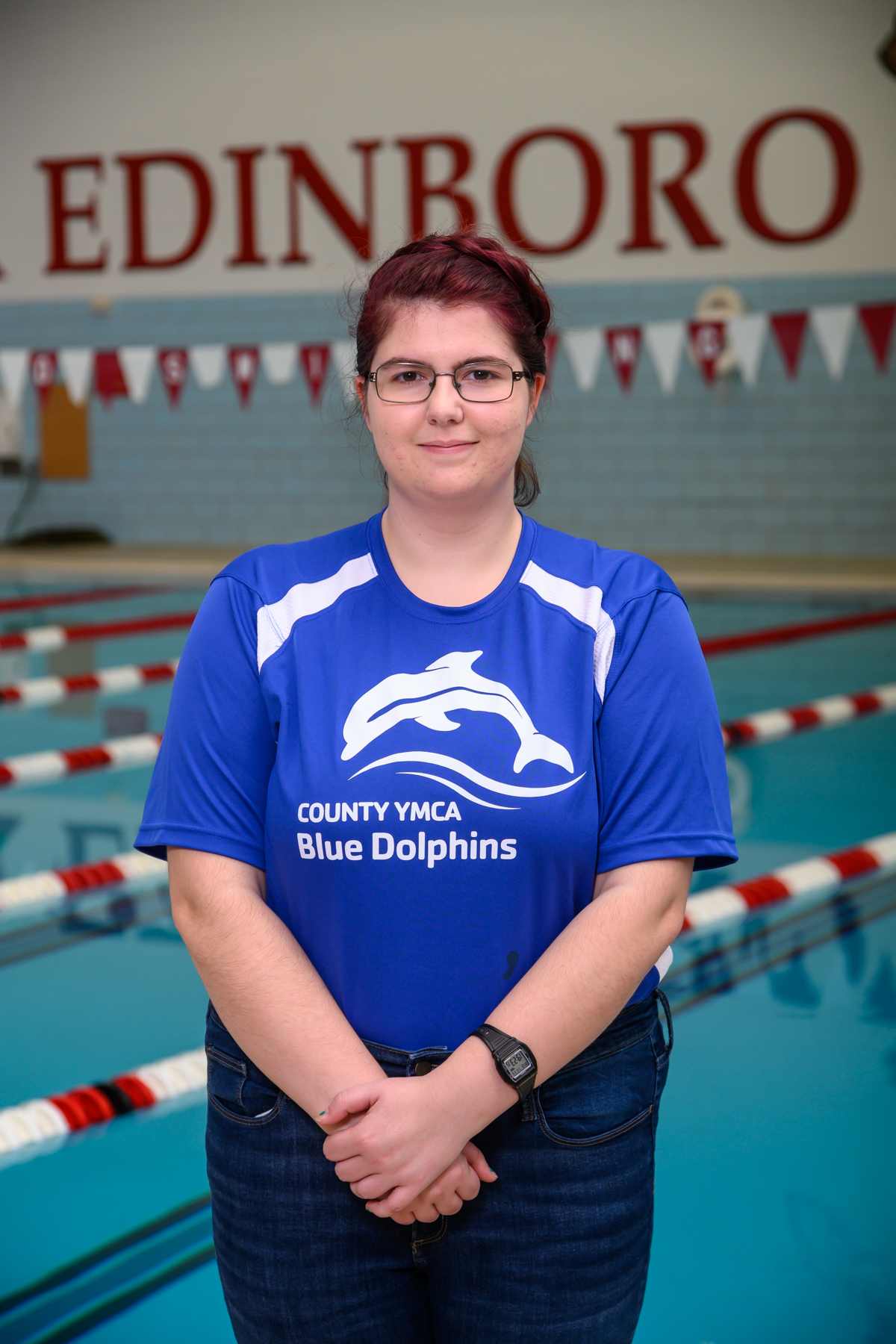 I have worked as the assistant coach for the County Blue Dolphins Swim Team since January of 2018. I am currently attending Edinboro University for Graphic Design and plan to graduate in spring of 2020.

I have been in the YMCA programs since I was 3 years old in both daycare and swim lessons in Erie Pennsylvania and eventually joining the Eastside Swim Team at the age of 8 and swam competitively on several different teams; Eastside, Erie, St. Johns Holy Rosary, and Central Tech’s high school team, until I graduated from Central’s engineering program in 2016. I swam mainly backstroke and freestyle during my time swimming competitively and at the end of high school, my junior and senior year, I began to swim the 500 freestyle. During high school I became a lifeguard and soon after got my swim instructor certification. I quickly realized how much I enjoyed teaching people how to swim and improve their technique.

I enjoy coaching because it allows me to give to the swimmers the same amazing experiences I had in my youth swimming. Swimming taught me to be a strong determined person and I hope that the swimmers under my instruction can learn that too. I am still constantly trying to improve my own strokes as well so I can coach the swimmers as best I can. I hope that every swimmer will excel and be proud of themselves and their accomplishments this season and I hope to help them achieve this in any way possible. 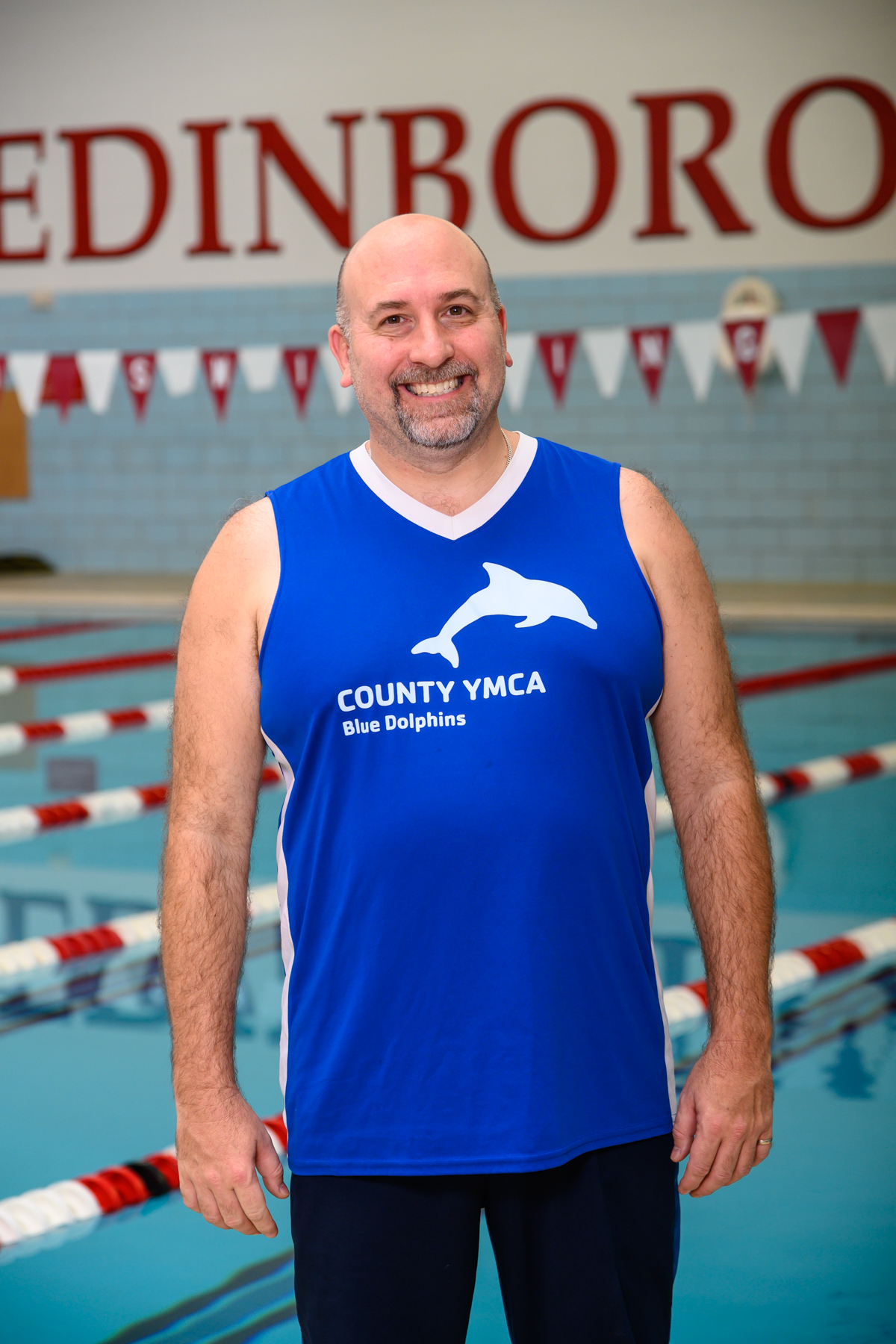 I started my swim career when the YMCA Coach in North East PA saw me during swim lessons when I was 10.  He asked me if I would like to swim on the team and that began my competitive swim career.

The new friends I made and the confidence I gained were two important gifts I received from the Y Team.  I even swam for the Y team during my HS career, where I was a 4 year Letterman.  I was also a member of the IUP swim team for one semester before I joined the USAF.

When my daughter joined the Dolphins two years ago, I wanted to help give these swimmers the same experiences I had.  I have been a parent volunteer coach for the last 2 years and now I want to contribute even more.  I look forward to watching the current and future Dolphins flourish in the program. 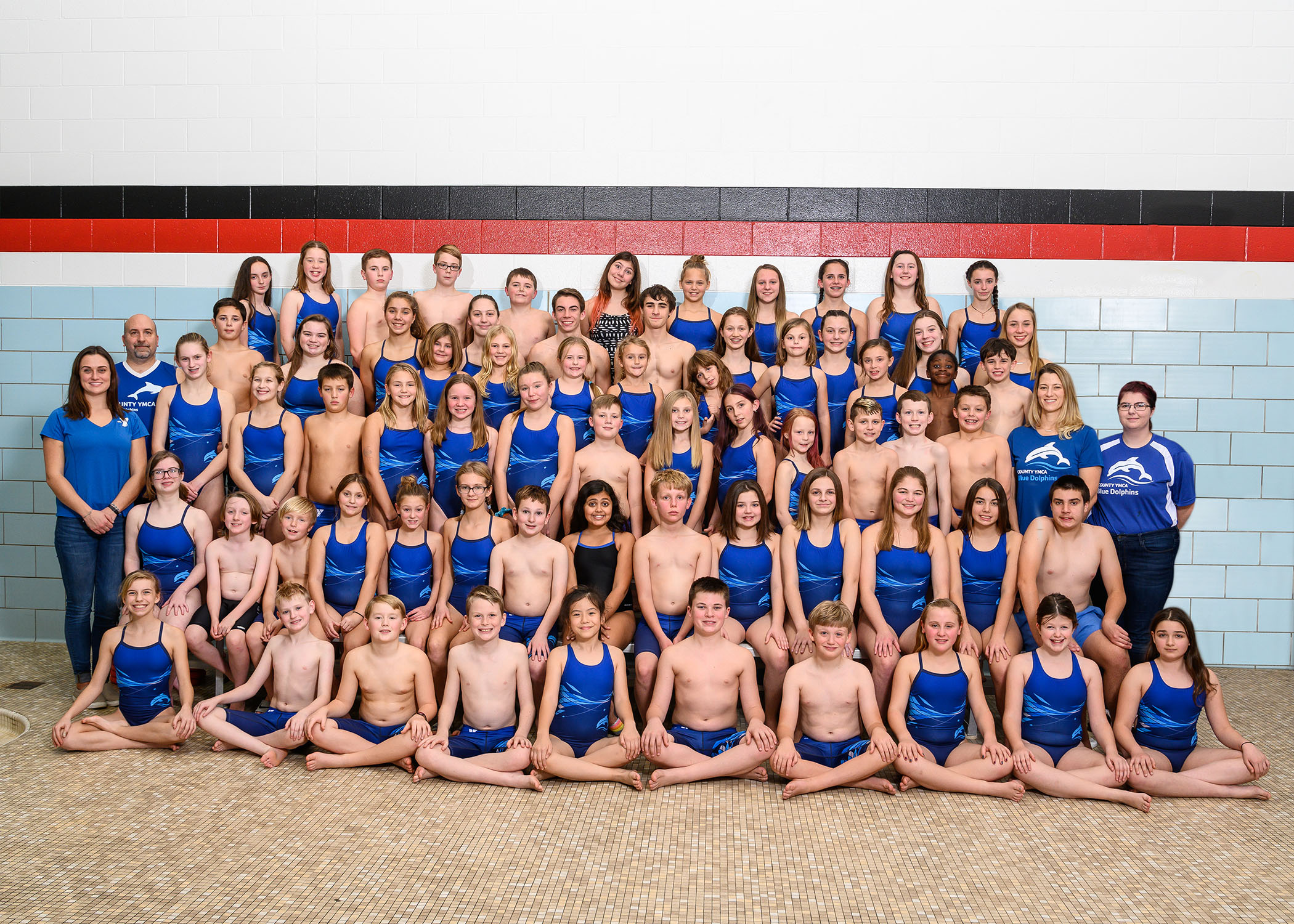 The County Y Swim Team is set up in levels based on achievement, attitude and commitment. This enables swimmers to progress at their individual rate while building bonds with team members in all age ranges. Placement into swimming color levels is based primarily on the ability of swimmers.

The practice groups are as follows: (a swimmer may move up to help promote their growth and excel or be placed down a level to avoid feelings of frustration or overwhelmed in their current group.

Minimum Expectations: Complete 25 yards (1 length of pool) freestyle and backstroke without stopping or receiving assistance. This is the introductory level of competitive swimming for swimmers 8 & under. This group teaches the basics of competitive swimming in the Y while having fun. This group builds upon the skills learned in Y swim lessons and to learn the long axis strokes, Freestyle and Backstroke as well as introducing the swimmers to Breaststroke and Butterfly. Additionally, the swimmers are taught how competitive swim meets are run so that they know what to expect when they enter their first meet and participate in meets during the season.

Minimum Expectations: Complete 50 yards of freestyle and backstroke with basics of breaststroke and butterfly established. The focus is on improving all four competitive strokes as well increased yardage to practices. Work on establishing start and turn techniques, race management and strategy is introduced to begin to advance as an overall swimmer.

Minimum Expectations: Complete 50 yards of freestyle, backstroke, butterfly and breaststroke. Focus on stroke development and technique on the four competitive strokes, as well as start and turn technique improvement continues as part of practice. Additionally, athletes spend an average of about 1/2 of practices working on building training volume to increase yardage. Competitive team aspect is introduced and goals to encourage growth through the season.

Have excelled in the criteria of the Age Group level and are preparing to become a Senior level swimmer. Intense Goal setting and stroke work to improve competitive performance.

Minimum Expectations: Complete 500 yards freestyle, 200 yards individual medley and repeat 100s of each stroke. Athletes entering this group must display a desire to begin training on a more committed basis. Senior Group is for swimmers who wish to make a stronger commitment to the team and to competitive swimming. Additionally, training focus becomes more individualized to the types of events the swimmers are most successful in for end of season competitions. Attendance, attitude, team support and work ethic expectations are elevated and more is expected of the swimmer. Dry land training and structured goal setting is introduced and expected of the swimmer to advance to their full potential. Teamwork, volunteerism and a positive attitude are essential for this level. Swimmers compete in a full slate of competitive events and place a greater emphasis on team development. Swimmers aspiring to excel in the highest levels of swimming will benefit from the foundations developed at this level. 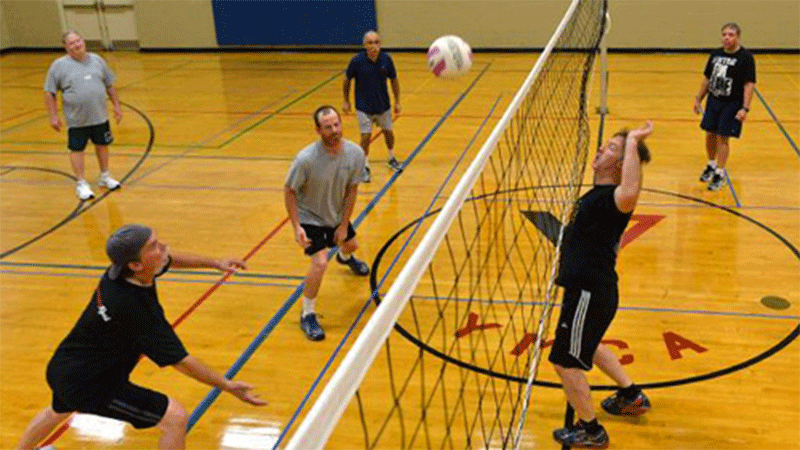 Our amenities are our resources and staff your support to help you live a healthier life and reach your goals. 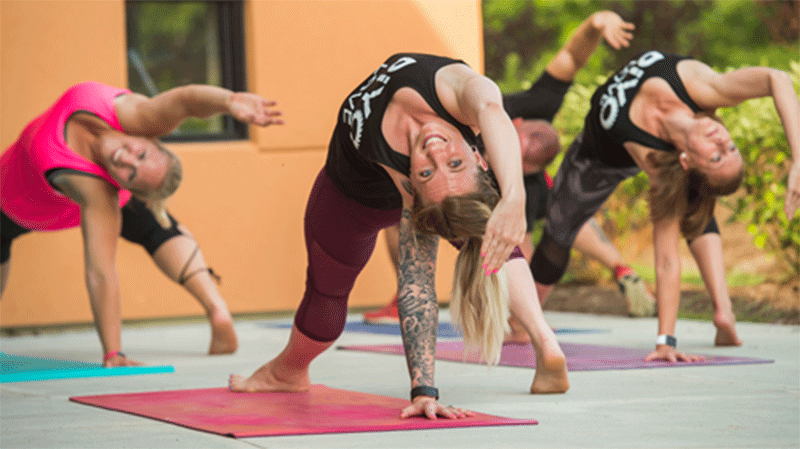 Break a sweat, chat with a friend, relax your mind, challenge your body or reconnect and recharge. 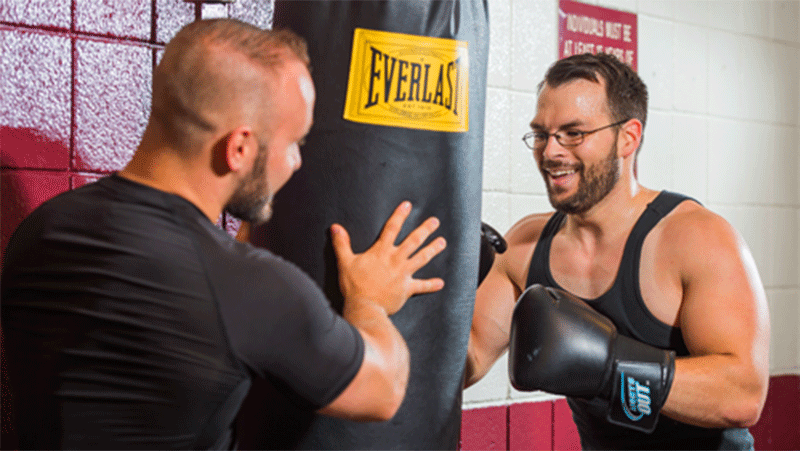 Reach your goal one on one or in group training with certified professional staff. 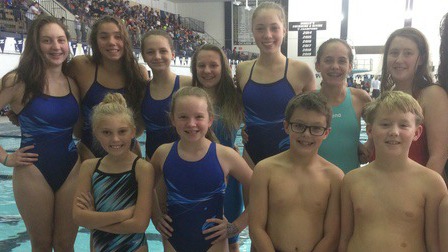 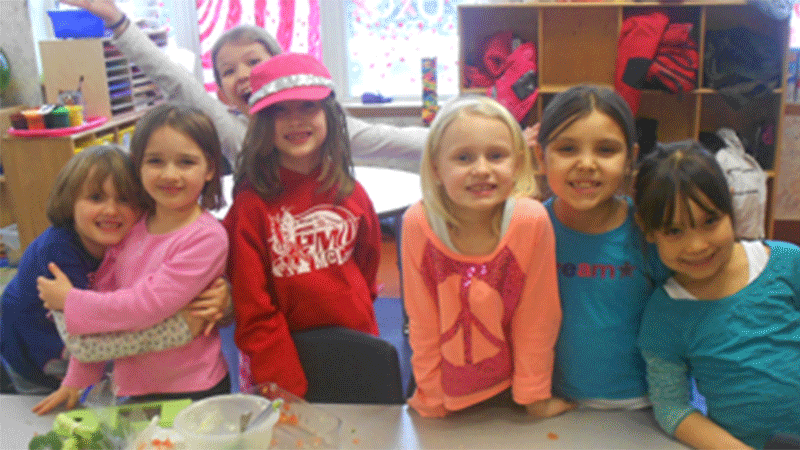 Parents count on us for enriching, loving, safe and high quality learning environments for children 6 weeks through 12 years. 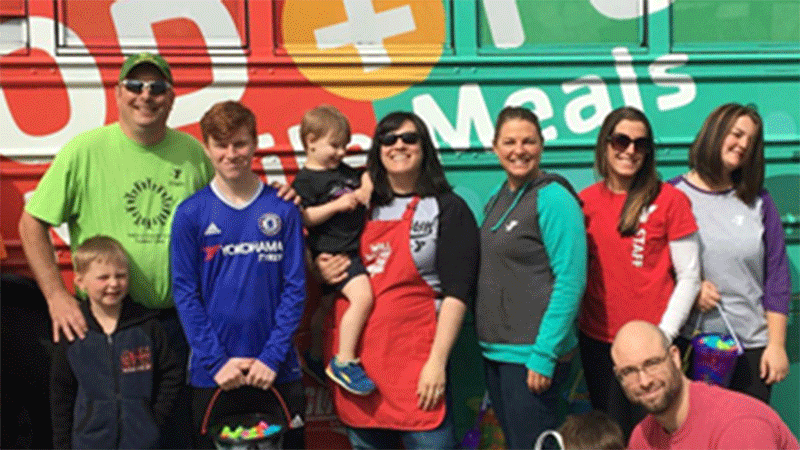 Meet other members and join us in giving back and supporting our neighbors.